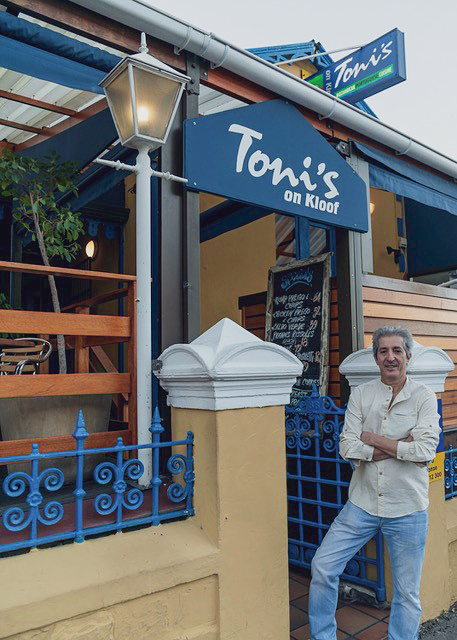 TONI’S SECRET INGREDIENT: Coriander “I couldn’t cook without it. It adds unbelievable flavour to dishes, especially seafood dishes. One of my secrets is to chop fresh coriander just before serving a meal and toss it in before serving; it brings out all the natural flavours of the meal.”

For years Toni’s has been regarded by the locals as one of the best places to eat, love, celebrate, laugh and even cry in Cape Town. It has been said that someone who does not care much about food, or rather who does not really appreciate good food, is insensitive in other areas of life.

At Toni’s you’ll find people who both appreciate good food, and who are passionate about life. Love affairs have been started over Toni’s crispy and plump prawn rissoles, and some have ended over a perfect chocolate mousse interspersed with real bits of chocolate. Friendships have started and grown over weekly fixes of succulent and tongue-tingling peri-peri chicken or freshly grilled crisp sardines. Heated debates have been discussed over tasty pots of decadent, voluptuous seafood rice or flavoursome feijoada, deals have been signed, careers have been sealed and broken hearts have been healed, all with a plate of good, home-style Portuguese fare.

Toni’s is more than a restaurant for the locals. For them it is a second home. A place where they not only get comfort from the familiarity of the warm staff and the enigmatic and lovely Toni, but also a place where a plate of food is likely to inspire love, laughter, even distant memories of childhood, or fond recollections of travels abroad and often, for some, a sense of having come home.

Toni’s is, in a word, honest. The food is authentic Mozambican Portuguese fare (Toni is a stickler for traditional recipes that have made Portugal one of the world’s finest cuisine destinations and he has brought with him the oft-forgotten combined flavours of Mozambique and Portugal).

The freshest ingredients also ensure that real flavours burst forth. Then there is the staff: genuine attentiveness, both interesting and interested, they are well-schooled on the menu, as are the talented chefs, from Angola and Mozambique.

The ever-presence of owner and chef Toni, and the fact that he and his fellow chefs make food from order (that means almost none of it is pre-cooked), give the place the edge in city that is known as the food capital of the country.

With subtle flavours such as fresh garlic, coriander and peri-peri tickling and teasing the taste buds, once a week is usually never enough for a devotee.

Which is very do-able, as Toni’s has managed to keep prices within the very reasonable margin.

It is not only the fine, home-style food, which Toni’s has in abundance, but also the unpretentious warmth that greets you when you enter the blue wooden door, that has the locals returning again and again.

And if you’re in luck, late at night, one or two well-known artists who frequent the establishment may break out into song or dance.

Toni has managed to get just the right balance of clientele who range from the Bohemic who’s who (think some of the country’s finest artists, musicians, photographers, dancers, writers and editors) to local families and tourists, to the trendy and who’s who (models, government ministers, international businessmen etc). Somehow the groups blend effortlessly, often with a conversation starting across tables, which are then joined up. What is also noticeable amongst the clientele is how many restaurant owners from across the city choose Toni’s as their local.

For newcomers to Cape Town, Toni’s has proven to be not only a place with the best, and probably only genuine Portuguese Mozambican fare in town, but a place to get to know the real Cape Town. This probably has much to do with the consistent good fare and consistent warm welcoming you’ll get at Toni’s.

Friendships made at Toni’s often last a lifetime and survive moves across the globe. That is the magic about Toni’s.

As Toni is often heard saying: “Dining is not just about the food, although if the food is bad, then that is all it is about. However, if the food is good, then it also becomes about the other things that good eating evokes, such as fond memories, nostalgia… it is about the heart and the soul’s longings and about quenching those too.”

And on that, Toni’s delivers on all fronts.

Toni grew up in Mozambique to Portuguese parents. His fondest memories of his youth all revolve around his parents cooking. He would watch in delight as dull, lifeless prawns (shrimps) took on a life of their own, turning a bright pink with the heat of his mother’s stove and the added touches of her spicy flavours.

Coming home from school, Toni was often greeted with bitoques (mini steak, egg and chips). “I didn’t realise then just how lucky I was to be presented with such incredibly delicious food, made with such love. But the thought of those flavours waiting for me on a plate at home, often got me running through the streets to my parents home in anticipation.

”However, as one does in one’s youth, I often took for granted the wonderful meals I grew up with and it was only when I left home and started travelling that I realised how truly magnificent my parents’ meals had been and how much love they had prepared them with.

”Now today when I cook Portuguese food, I cook to in a way to quell that longing I have for my childhood, to quell my nostalgia. In Portuguese, we would say I cook matando suades (to kill my nostalgia). ”From a young age Toni had a fascination with food. He loved how a few fresh herbs could change the most bland meals into a magical taste odyssey.

Both his parents, who now live in Portugal, were and still are “great chefs”, he says, “and I learnt a lot from them”.

Cooking was always a hobby of Toni’s, even though his life took him into the more cut-throat corporate world at first. However, when friends started begging him to cook almost nightly for them, he realised that it was perhaps time to swap his briefcase for a spatula, and turn his passion and his hobby into a career.

And so Toni’s restaurant was born almost a decade ago. While there are many national and traditional dishes, Toni has handpicked the most popular and most representative of their origins for his menu. Besides the menu, you’ll find a specials’ board at Toni’s with delicacies such as bacalhau (cod fish) and feijoada (traditional stew).

Also a health fanatic, Toni ensures that his food is not drenched in oil or salt. ”My food is healthy. By using only the freshest of ingredients and herbs and spices, I find I don’t have to use lots of salt and oil. The food is flavoursome already.”